The Sola-Busca Tarot is absolutely unique in Tarot history since it is the only extant and complete 15th century deck.

It is also the only ancient deck in which all 56 “Minor” cards are illustrated with characters, instead of the traditional symbols. But before entering the symbolic dimension can be useful to know something of the history of this beautiful deck.

The name “Sola-Busca” attributed to this deck comes from the noble Milanese family that had owned this 78 cards from 1948. In 2009 the cards was bought for € 800.000 by the Italian Ministry of Heritage and Culture and delivered to the Pinacoteca of Brera, in Milan.

Of these cards have spoken briefly a few scholars, among which we must remember before all the nobleman Leopoldo Cicognara (Ferrara 1787 – Venice 1834 ).

§ Leopoldo Cicognara and the Busca-Serbelloni Tarot

Count Cicognara was the first historian to dating the Sola-Busca Tarot. I quote an excerpt of his book Memoirs to serve the history of intaglio printing (“Memorie spettanti alla storia della calcografia”) published in Prato (1831), pp. 161-162:

« Here’s what is result from the studies that I have diligently get on a deck of cards printed in Venice with the permission of the Senatus Venetus in year MLXX ab urbe condita . That date is on the figure of Bacchus n. XIV and corresponds to the year 1491, since the Venetian Era (ab urbe condita = birth of the town), starts from the year 421, not from 453 as someone wrote mistakenly (…).

This valuable monument is held in Milan from noble Madam Marchioness Busca, born Duchess Serbelloni, which let me kindly a diligent investigation. It was so clear, after a more accurate examination, that these cards were carefully carved in copper, since the signs are visible through the overlay color graver (…) so that you can see the traces of impression. This is precisely the same edition of cards that Zani reported having seen divided in two Cabinets in Naples, check that I did too (…)

The figures have various denominations. Here are a few examples. The King of Cups is called Lucius Caecilius R. and Queen is Polyxena. The King of Money is King Philip, the Queen is Elena and the Knight is Sarafino. The Jack of Spades is called Panfilio… See Table XII ».

From the text of Cicognara we learn various interesting things:

2. to the beginning of the 19th century the deck belonged to the noble family Busca-Serbelloni, but we don’t know if it came through the women’s branch of the family (the Duchess Serbelloni) or through the male branch (the Marquis Busca);

3. existed in Naples, divided into two private collections, an incomplete deck of these cards that certainly doesn’t painted because in this case both Zani and Cicognara would have highlighted this detail. It is necessary to explain the reference of Cicognara to Pietro Zani, author of a book titled Materiali per servire alla storia dell’origine e de’ progressi dell’incisione in rame e in legno (“Materials to serve the history of the origin and progress of copper engraving in wood”) Parma, Stamperia Carmignani, 1803.

4. the text of Cicognara redirects the reader to see a table of illustrations (Tav. XII) that does not exist in the book.

By coincidence, I recently purchased the Tav. XII quoted by Cicognara together with a Tav. XIII not mentioned in the same book but that obviously had connected to it. I’m speaking about two engravings (mm 460 x mm 320) containing some of the Sola-Busca cards that was reproduced by Cicognara through transparent paper, then printed in single-sheets and added to the portfolio that supported the book of Memoirs.

This portfolio today has become extremely rare and this is also why I am very proud to showcase two prints which today enrich my personal collection of ancient Tarot.

Two sheets of cards from Sola-Busca Tarot,
extract from the portfolio annex to Memoirs to serve the history of intaglio printing, (1831) by Leopoldo Cicognara.
Private collection of Giordano Berti

King of Disks and King of Amphoras,
from the Tab. XII of the portfolio annex to Memoirs to serve the history of intaglio printing (1831) by Leopoldo Cicognara.
Private collection of Giordano Berti

§ Sola-BuscaTarot cards in the British Library

In 1876 William Hughes Willshire, curator of the collection of prints and drawings at the British Museum, published A Descriptive Catalogue of Playing and Other Cards in the British Museum. In this work Willshire describes also the 23 cards of the Sola-Busca Tarot acquired by the Museum in 1845. These cards had a very important role in the development of modern Tarot esotericism, but follow this story in chronological order.

In 1907 the family Busca-Serbelloni donated to the British Museum the black-and-white photographs of all 78 cards. Shortly thereafter, these photographs were placed on exhibit at the same Museum. Probably on that occasion Arthur Edward Waite saw the Sola Busca Tarot and took inspiration to create some cards for his deck of Tarot cards which was planning for some time. Concerning this topic, go to page: SOLA-BUSCA & WAITE-SMITH TAROT.

About 25 years after another scholar, Arthur Mayger Hind, in his Early Italian engravings (London 1935) made the first hypothesis about the origin of the deck and its author. Following Cicognara, Hind suggested that Sola-Busca Tarot may be dated from the inscription “ANNO AB URBE CONDITA MLXX” on Trump XIIII of the illuminated version.  Because other cards refer to Venice, the year of production (MLXX = 1070) of the deck must point to the year of foundation of Venice,  traditionally indicated in 421. This means that the sola-Busca Tarot was almost certainly produced in 1491.
Hind also found in various European museums other Sola-Busca engraved versions and gave his hypothesis about the likely author of these cards. Perhaps he also had the opportunity to study the 78 cards of Sola-Busca family, the only existing in color version, painted by hand a few years after the printing of the deck.Hind suggested that the Monogram M.S. on some cards could be a reference to Mattia Serrati from Cosandola, a miniaturist operating around Ferrara in the early 16th century. 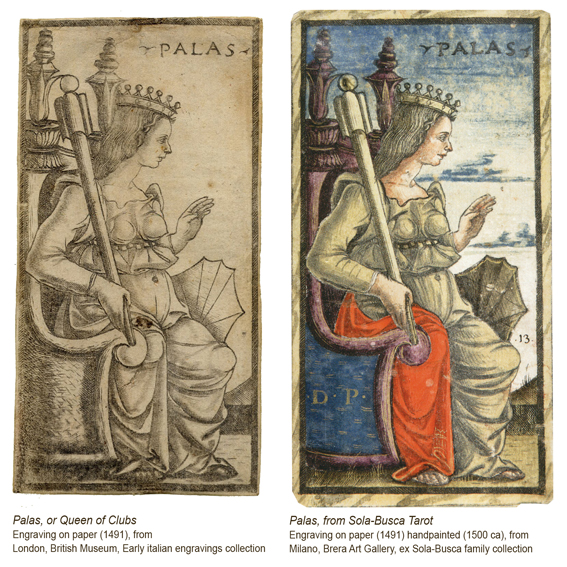 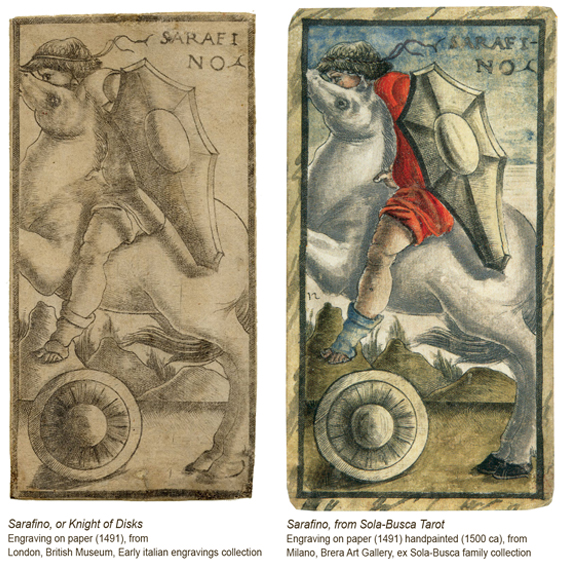 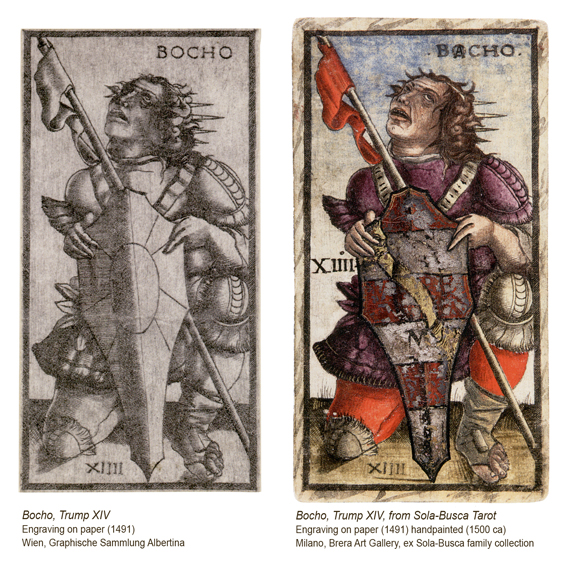 § Recent studies on Sola-Busca Tarot
During the two last decades of the 20 century, about Sola-Busca Tarot have written some Tarot historians, including the AUTHOR OF THIS SITE, Giordano Berti, in the catalogue of the exhibit The Tarot. Game and magic at the Court of the Este family (“I Tarocchi. Gioco e magia alla Corte degli Estensi”, Castello Estense, Ferrara 1987).
On this occasion were stated twenty-four original cards of Sola-Busca Tarot, preserved in the Graphische Sammlung Albertina in Wien.
Marzia Faietti, of the Bologna City Art Gallery, wrote an important study in the catalogue of the exhibit catalogo The Muses and the Prince (“Le Muse e il Principe”, Museo Poldi Pezzoli, Milan, 1991), in which were exhibited to the public for the first time all 78 cards provided by Sola-Busca family.
Some years after, in a book titled Ancient enlightened Tarot. Alchemy in Sola-Busca Tarot (“Antichi Tarocchi illuminati. L’alchimia nei Tarocchi Sola-Busca”, Turin, 1995, with prefaction by Giordano Berti), the scholar Sofia Di Vincenzo proved the 78 cards of the Sola-Busca Tarot relate to the alchemical tought of the Renaissance.  The book was accompanied by a version of the Sola-Busca Tarot created by a contemporary artist on paper from the early 20th century. Concerning these topics, go to pages:  CONTENTS OF SOLA-BUSCA TAROT and SOLA-BUSCA & ALCHEMY.

Recently, the author of Sola-Busca cards was identified with the painter Nicola di maestro Antonio (Florence 1448 – Ancona 1511). The year of completion is given around 1490-91. It is unknown whether Nicola composed the 78 figures as his invention or if he had been commissioned. It is certain, however, that copies of the deck were reserved for a number of clients. In fact, the cards were printed using the copperplate method and reproduced on paper in an unknown quantity of specimens. Each card measuring approximately 78 x 146 mm, but this measure is variable due to the artisan manufacturing process. Some public and private collections preserve various cards in black-and-white of the Sola-Busca Tarot; some of these were displayed in an historical exhibit organized by myself (together with Andrea Vitali) at the Estense Castle in Ferrara in 1987: “The Tarot: game and magic at the Estense court“. The only complete colour copy with all 78 cards (hand-coloured a few years after printing the deck) is today owned by Pinacoteca di Brera from 2009. Of Sola-Busca Tarot there are two modern reprint versions, but these are either incomplete or absolutely distorted for colours and sizes. The only deck perfectly adherent to the original is this one: printed privately by Wolfgang Mayer in 1998 in only 700 copies, personally hand numbered by him on an additional card, and personally signed by him. The deck was made, as Mayer wrote, for “collectors, researchers, and mystery lovers”. Concerning this topic, go to page: ABOUT SOLA-BUSCA BY MAYER. 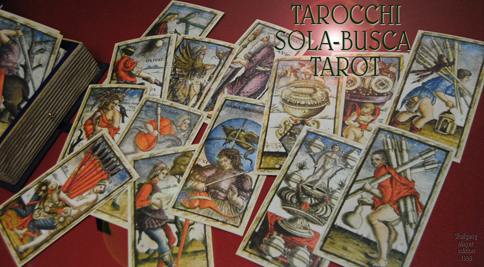 Regarding the meanings of the78 cards, the most interesting interpretation was provided by Prof. Sofia Di Vincenzo in her “Ancient illuminated Tarot – Alchemy in Tarot Sola-Busca” (Turin 1995 and Stamford 1998). Concerning this topic, go to page: SOLA-BUSCA & ALCHEMY. On this and on other contributions is based the critical study by Laura Paola Gnaccolini in the catalogue of the exhibition “The secret of secrets. The Sola Busca Tarot” (Milan 2012), which most important contribution to the history of the Sola-Busca was the designation of the author: Nicola di maestro Antonio (Florence 1448 – Ancona 1511). You can see a short video on YouTube, or go to the web page of Pinacoteca di Brera dedicated to the exhibition.

Therefore, it is demonstrated that the Sola-Busca Tarot is an authentic work of knowledge whose secrets are bound to the hermetic-alchemical culture that had a re-emergence in Italy in the 15th century and subsequently spread across the rest of Europe.

Written in Bologna by Giordano Berti, January 2013, and revised in September 2013

3 thoughts on “History of Sola-Busca Tarot”